Full-size English/Español version of the poster.

We present ongoing research using data visualization and complex network analysis to historicize the production of three periodicals: Fireweed, Fuse, and Border/Lines. Computational methods allow for the visualization of metadata describing these magazine issues as a complex network – but what do these visualizations reveal about real social relations involved in the production and circulation of these magazines? Fireweed, Fuse, and Border/Lines emerged between 1976 and 1986 in Toronto, Canada, from a hotbed of lesbian and gay liberation, feminist and cultural race politics, thereby circulating in relation to transnational social, political and cultural movements (Butling and Rudy, Gonosko and Marcellus, Monk, Robertson). Whereas digital art historical scholarship often applies computational methods to the analysis of visual images (Zorich, Manovich), this paper instead applies complex network analysis to bibliographic metadata describing artist-led magazine publishing. We propose that there is a correlation between the magazine as a site of imagined community (as a discursive site where artistic scenes and poetic community are formed) (Allen, 12-17); and the complex networks visualized from metadata describing production teams and content of each printed issue (Knight, Long, Lincoln, Liu).

To read the rest of this paper, see this extract from the DH2018 book of abstracts: Tayler_Neugebauer_dh2018_abstracts

The entire collection of abstracts is also available. 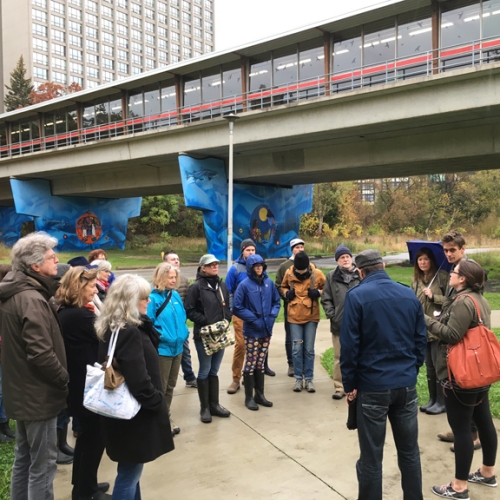 Throughout the 2017-2018 academic year, I had the pleasure of leading a Jackman Humanities Institute Working Group at UofT, alongside Barbara Fischer and Elizabeth Legge. The official description of the Group is up on the JHI site, but in response to questions I have had, I’ve list a more detailed description our activities here.

Meetings
A series of eight meetings took place as public and invitational events working through different presentation formats, with a rotating attendance. At each meeting, core group members were complemented by invited guests including graduate students, scholars, members of community arts organizations, and major public galleries and museums.

Presenters: Felicity Tayler outlined the goals, objectives and methods to generate interdisciplinary debate within the group over a series of eight meetings-as-events. Barbara Fisher addressed successes and “lessons learned” from the 2015 This is Paradise conference. Rosemary Donegan, Theresa Enright, Elizabeth Legge, Janine Marchessault, Scott Rayter, Dot Tuer, Rinaldo Walcott each presented physical objects and conceptual issues that they would respond to, and work through, in the context of the group.

October 28. Indigenous Roots and Routes along the Humber River.
Attendance 25

This meeting took place as a public event, promoted through the JHI mailing list. Scholar and guide for First Story Toronto, Jon Johnson (French Canadian, with Haudenosaunee and Kichisipirini ancestry), led a walking tour that engaged Indigenous understandings of sovereignty, space, and place as it intersects with the urban geography and settler history of the GTA. Following the protocols of oral tradition, Johnson conveyed Anishinaabe knowledge to the group through a reading of Resurge: First Timeline (2017) murals painted by Philip Cote (with Kwest, Nelly Torossian, and Jarus).

Jason Baerg is a Cree Métis artist of international reputation working at the intersection of painting, digital media, and installation. He works from a double-consciousness that can be related to the Woodlands School, as Indigenous cultural signifiers are deeply embedded in the process and creative outcomes of his studio practice. Like writer Leanne Betasamosake Simpson, Baerg is part of a generation that deliberately creates work on visual and linguistic terms recognizable to Indigenous viewers and readers. Non-Indigenous publics are attracted to the works through their own uptake of worldviews that are coded within the visual forms. Woodlands stands as a multigenerational reference for visual artists who have worked in this manner. Norval Morrisseau, Daphne Odjig, Alex Janvier, and their peers adopted the so-called universalism of modernist abstraction as a vocabulary within which they could express an internal landscape of spiritual, cultural, and political affirmation.

In Baerg’s work a transcultural double-coding takes place as tensions arise between figuration and abstraction, and across physical and digital media. This play across representational and intermedial registers can be seen in two bodies of work: Relations (2010/2018) and Authors and Antidotes(2009). Relations reinvents the Western avant-garde’s break with verisimilitude in portraiture, by looking to Indigenous traditions of abstraction that predate modernism in Eurocentric art-historical timelines. The pairing of oil painting with digital sketches and animations inserts a sense of futurity into this redrawn timeline. Authors and Antidotes combines large-scale, hard-edge abstraction with collage-like strategies reminiscent of concrete poetry and combine paintings. The ASCII character code, which unifies the eclectic visual field, is a transposition of Baerg’s reflective writing practice. While this text addresses personal and community healing, these themes are also echoed in the red, yellow, white, and black colour fields, which correspond to the traditional Cree teachings of the four directions. On one hand the ASCII code can be read through a shared subculture of nostalgia for early computer technologies; on the other, this code and its palette camouflage meanings recognizable to viewers with lived experience of Indigenous traditional knowledge and practices.

For the full article and images: http://esse.ca/en/jason-baerg

This graphic novella was commissioned in conjunction with Luis Jacob’s exhibition Habitat, May 5 – June 10, 2017, at Gallery TPW. It was also used as a talking point during a Saturday afternoon conversation. The graphic novella weaves together references to the representations of Toronto in Jacob’s work Sightlines, ongoing conversations with the artist, and sociologist Pierre Bourdieu’s explanations of social space. Print versions were distributed throughout the exhibition. A PDF can be downloaded from Gallery TPW.

The Grey Guide to Artist–Run Publishing and Circulation is composed of a series of seven essays, addressing distribution as a key concern for publishing within artist–run culture, alongside complex issues like conditions of production, copyright and fair dealing, and ethical protocols arising from within a community of practice. The Grey Guide was initially distributed as a serialized bi–weekly e–campaign, from March 1st to June 21, 2017. A print version is now available as of September 2017.
***
Le Petit Gris : guide de l’édition en art et de la distribution autogérée réunit une série de sept rubriques. END_OF_DOCUMENT_TOKEN_TO_BE_REPLACED

At the time
Blog at WordPress.com.