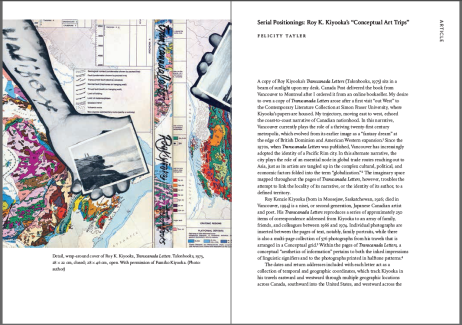 A copy of Roy Kiyooka’s Transcanada Letters (Talonbooks, 1975) sits in a beam of sunlight upon my desk. Canada Post delivered the book from Vancouver to Montreal after I ordered it from an online bookseller. My desire to own a copy of Transcanada Letters arose after a first visit “out West” to the Contemporary Literature Collection at Simon Fraser University, where Kiyooka’s papers are housed. My trajectory, moving east to west, echoed the coast-to-coast narrative of Canadian nationhood. In this narrative, Vancouver currently plays the role of a thriving twenty-first century metropolis, which evolved from its earlier image as a “fantasy dream” at the edge of British Dominion and American Western expansion. Since the 1970s, when Transcanada Letters was published, Vancouver has increasingly adopted the identity of a Pacific Rim city. In this alternate narrative, the city plays the role of an essential node in global trade routes reaching out to Asia, just as its artists are tangled up in the complex cultural, political, and economic factors folded into the term “globalization.” The imaginary space mapped throughout the pages of Transcanada Letters, however, troubles the attempt to link the locality of its narrative, or the identity of its author, to a defined territory.

An abstract for a paper delivered on a panel at the 30th annual 2 Days of Canada Conference: The Concept of Vancouver.

Co-panelists for the “Activist Cultures in Vancouver” session were Markus Reisenleitner and Heather Smyth.

A blurry snapshot of an issue of the Georgia Straight, c. 1968. Note city Alderman Harry Rankin’s critique of urban development on same page as publicity for Intermedia.

A friend gifted me a well-traveled copy of Jeff Derksen’s tract, How High is the City, How Deep Is Our Love? (Fillip Editions, 2011). At the time, I was thinking through Roy Kiyooka’s description of “Our City” in Transcanada Letters (Talonbooks, 1975), which shares an epistolary model of imagined community with Charles Olson’s Maximus Poems. This paper will explore an echo I perceive in Derksen’s call to action for imagining the city through a renewal of neo-avant-garde critical practices and Kiyooka’s description of an imaginary city conjured through the affective accumulation of “poly-morphously peverse” identity shifts. Derksen’s text reflects upon the dialectic arising between the affective relationships generated through the lived experience of a city and the fixed identity categories imposed when our desires are solicited by the governing discourse of urban planning. The inhabitants of Kiyooka’s city have collectively adopted pseudonyms and alter-egos, which, he muses, are part of their shared practice of accessing a “so called real-self” in association with the psychedelic, multisensory and collaborative environment of Vancouver’s Intermedia Society (1967-1972).

Neither a return through restorative nostalgia, nor a projection towards an avant-garde for a future art city, this paper will pay attention to how these past and present calls for mutable identities respond to a continuous process of urban development in Vancouver. Historical context includes a discussion of the final few issues of Tish and the Georgia Straight newspaper, as well as the conflict between Leftist discourses that coincides with the dissolution of Intermedia Society.

The abstract for my doctoral thesis! Successfully defended the 29th of September.

Conceptual Nationalisms: Conceptual Book-Works, Countercultural Imaginaries and the Neo-Avant-Garde in Canada and Québec, 1967-1974

Recent exhibitions have redefined conceptualism as a global movement that emerged alongside locally situated experiences of national liberation movements, New Left social activism and countercultural world-making. This thesis proposes an art historical term, “conceptual nationalisms,” as a contribution to the historicisation of conceptualism as the movement emerged in Canada and Québec. The term retrospectively describes book-works and magazines produced by an overlapping artistic and literary neo-avant garde, which evince the symbolic value of print media forms during the post-Centennial period (1967-1974). As funding for the arts increased and converged with labour policy in this period, the relationship between state ideology and a conceptualist critique of the art object as a commodity became intrinsically intertwined. Many conceptual book-works and artists’ magazines were produced alongside publications issued by literary small presses, as such, this thesis also recognizes parallels taking place between the linguistic turn in conceptual art and literary movements such as concrete, visual and sound poetry that emphasize the materiality of the signifier in language.

A continuous feeling of intense longing 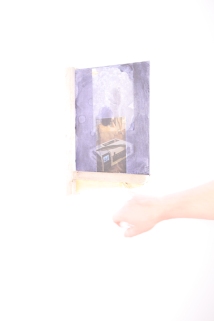 As I was documenting a work that is presently on display as part of La Nouvelle Biennale, this image emerged from a fortuitous glitch in timing and technique.

An excerpt from an exhibition review published in C Magazine 129 (2016), which reflects upon the metaphorical play with the concept of archiving in Hank Bull: Connexion, Galerie de l’UQAM, Montreal, Oct. 23 — Dec. 5, 2015, curators: Joni Low and Pan Wendt.

Hank Bull: Connexion begins with a cactus. It is a smallscale,
brightly painted variety assembled from interlocking
MDF pieces. Behind the cactus, a landscape
unfurls in a palette of many hues with a gestural
brushstroke suggestive of the mind-altering experience
of desert light. A few feet away in the gallery, a
television monitor plays Duster (1991), a video work
that parasitically rearranges the narrative structure,
pictorial conventions and racial stereotypes of televised
Hollywood Westerns. This episode, collectively
authored and performed, features Warren Arcan,
Rebecca Belmore and other artists, like Hank Bull,
associated with the Vancouver artist-run centre the
Western Front.

The encounter with a cactus thriving in the subterranean
environment of Galerie de l’UQAM works
as a visual and spatial metaphor for the exhibition
as a whole. Viewers’ successive discovery of the social
context that produced the TV-studio species of
cactus and its artificial environment stands in for the
way that mediated images influence our unconscious
formation of identity and social groups…

…Ultimately, the exhibition shows that it is more
useful to think about archiving as a series of “events,”
as suspended moments; not simply an institutionally
imposed protocol, but a form of mediation that occurs
at many stages in the circulation of cultural objects.
In this sense, Hank Bull: Connexion is a self-archiving
project with a reflexive relationship to the
public gallery that hosts it, the discursive effects of
art history and curatorial practice.

At the time
Blog at WordPress.com.